The Legal Documents You Should Create In the New Year

Get The Legal Help You Need 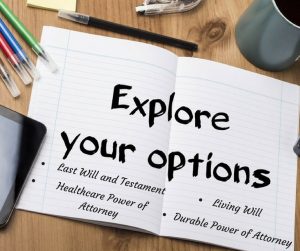 Now that we’ve turned the page to 2017, it’s a good time to assess the legal documents you should have, and update or create the ones you are missing.  While this may not be as sexy or exciting as some other resolutions, it is very important for your family and your finances.

These are the legal documents to consider:

1) Last Will and Testament

According to a recent online survey, the majority of Americans don’t have a will. This is a mistake for most people; should you unexpectedly pass away, the laws of the state, rather than your own wishes, will determine where your assets go. The new year is a good time to think about who you would want to have your possessions (and, crucially if you have minor children, who you would want to become their guardians) and create a valid will. Even if you have a will, you should dust it off every few years to be sure it still reflects your desires (and, if you’ve moved from a different state to Florida, that it conforms with Florida law). Updating an old but valid will can be done with an attachment known as a “codicil.”

Most of us have ideas of what kind of treatment we want at the end of our lives, but often we don’t share that information until it’s too late. A living will (not to be confused with a will–see my Blog on the misconceptions) tells your physician whether you want aggressive end-of-life care or life support if you are unable to convey those wishes. Don’t think because you’re young you don’t need this; tragic accidents can happen to anyone.

Doctors typically turn to a spouse or, if you’re not married, a living parent, to make important medical decisions should you become incapacitated. Allow you to have surgery? Go on certain powerful drugs? A healthcare power of attorney appoints the person you want for that role. You’ll want someone who keeps their cool under pressure because the important decisions will fall to that person during a crisis.

This document gives someone else the power to make major financial decisions for you, from paying your bills to, in some cases, selling your home. Before 2011, attorneys could create a power of attorney that was “springing”–that is, that could be used only if you became incapacitated. Since then, however, powers of attorney are deemed to be in effect as soon as they are created. This is why it’s crucial that you choose someone you deeply trust. If you already have a medical condition that prevents you from managing your finances, create this document and give it to the person you are naming as an agent so it can immediately be put into use. Another option, if you’re not quite ready, is to create the document but keep all copies under wraps until you want to give the agent your financial power.

Contact the Law Office of Gary M. Landau by email or call 954-979- 6566 to learn more about which documents you may need. Attorney Gary Landau personally returns all calls to him.

PrevPreviousTop Misconceptions of a Living Will
NextWhat Are Your Options If Your Real Estate Deal Goes Sour?Next